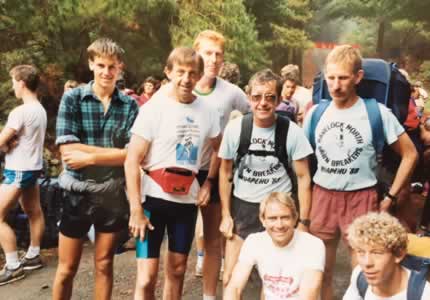 The Dawnbreakers reunite for 2018

MCL Construction Triple Peaks event is celebrating its 30th year this year, and for a small group of competitors the milestone is the opportunity for a special reunion.

Now an established landmark on the region’s sporting calendar, in 1989 the event was just the germ of an idea for a group of Havelock North runners, who dubbed themselves The Dawnbreakers, in recognition of their regular early morning forays.

This year several members of that group, now aged in their 60s and 70s, are back training to mark the event that they started 30 years ago.

Mike van Workum was a member of that running group and said about five or six of the original Dawnbreakers were entering Triple Peaks this year, including himself and two others who were entering as a team.

Mr van Workum said although they still kept fit, back in the early days the Dawnbreakers would run six days a week in preparation for marathons.

“In the mid to late 80s marathons were the thing, triathlons had not started then, but we preferred to run up hills rather than the flats - that was the advent of running over the peak.”

He said the initial idea of holding the event was to encourage people to get off the couch and enjoy the countryside, and the event soon expanded beyond Te Mata Peak to include Mt Erin and Mt Kahuranaki as well.

He said his team was this year taking on the three peaks as walkers.

“In the old days we would run, and then we started jogging, now we are doing a brisk walk - we expect it will take about eight or nine hours.”

Stuart Foote also joined the Dawnbreakers on their Sunday long runs and was one of the founders of the Triple Peaks event.

The first four Triple Peaks were organised by me and the Dawnbreakers assisted with course planning and marking and running the event on the day.

“After that I had become busy in other directions and the Dawnbreakers took over the run and continued it for the next few years.”

He said, being before the advent of the internet, the promotion of the event was through running clubs around the country.

“We weren’t sure how it was to be taken on by the running public and I can’t remember how many starters we had that first year, maybe about 80 doing the whole course and 100 or more as teams.  “Even in the early days people came from all over, although mainly the North Island.”

He said it was informal at the beginning.

“It was never a race, it was always just a challenge - the only person you were racing against was yourself.”

Mr Foote said he was intending to walk in the new one-peak explorer category, up Mt Erin peak - three days shy of his 73rd birthday.

When the event started, they did not give much consideration to its longevity, he said.

“We were quite suprised when it was still going even after four or five years, let alone the 30 years it is celebrating this year.”